Daisy Jones: Cape Town’s top-end chefs are expanding their businesses – will they succeed?

When the Cape’s season starts, Luke Dale-Roberts and George Jardine will have new restaurants open for holidaymakers. Liam Tomlin’s fourth restaurant will be just a year old. 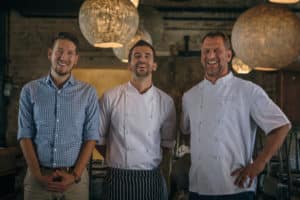 Dale-Roberts confirmed this week that Salsify at The Roundhouse will open this month with Ryan Cole – former head chef at The Test Kitchen – firmly at the helm.

Jardine and Brendan Thorncroft opened Seven in Somerset West last month. Thorncroft has worked with Jardine for seven years, most recently as head chef at Jardine Restaurant in Stellenbosch.

Once Salsify’s doors are open, Dale-Roberts and Tomlin will have four Cape Town restaurants each. Jardine has three.

These are not just any restaurants. The Cape’s “Big Three” chefs dominated Eat Out’s top 30 restaurants this year, occupying ten – or a full third – of the spots.

In the competition for Restaurant of the Year, Tomlin and Ivor Jones were placed fourth for Chefs Warehouse at Beau Constantia. Tomlin’s Indian tapas restaurant Thali made 16th position, and Chefs Warehouse & Canteen was in the top 30 (it won Best Tapas Eatery in the Everyday Eateries category). Chefs Warehouse at Maison only opened at the end of last year and therefore missed being judged for the 2018 competition.

Dale-Roberts and Cole took top honours for the sixth year in a row for The Test Kitchen. Dale-Roberts is a partner in The Shortmarket Club, which came in eighth. The third restaurant on his website, The Pot Luck Club, was placed tenth. Luke Dale-Roberts X The Saxon – which he has since left – was number 19.

Jardine Restaurant was named 11th best restaurant in the country this year; Jardine and Kyle Burn were placed 14th for Jordan Restaurant.

Here’s a reasonable question: What does this expansion mean for diners? Does the growth of The Big Three’s restaurant businesses simply mean a growing number of exciting food experiences for us? Or does it mean that Dale-Roberts, Tomlin and Jardine are spreading themselves a little thin?

Bear in mind that Tomlin has, for the past three years, also overseen food and kitchen management for the Singita group. Tomlin works alongside Singita’s executive chef, Andrew Nicholson. Singita’s kitchens are made up of close to 200 chefs.

Chef’s Warehouse employs 180 people through its four restaurants. Tomlin has cooked in restaurants for 40 years; these days he devotes himself to business.

Dale-Roberts ran two pop-ups this year: The Drought Kitchen (at home) and the six week Test Kitchen Mauritius. He cooks every night at The Test Kitchen.

Jardine divides his time between Jordan, Seven and Jardine, where Hilde-Lee Oliver is the new head chef. Oliver worked with Jardine at Jordan, followed by a stint at Terroir.

In fine dining, quality is everything. Standards must be upheld, night after night. In addition, diners who book at a Dale-Roberts, Jardine or Tomlin restaurant quite rightly expect the star-quality of those chefs to shine through in their meals. In other words, we expect exceptional and characteristic concept matched by an exceptional dining experience, consistently delivered.

Diners are justifiably disappointed when kitchen staff have a “cat’s away” approach to chef patron’s absence. I have eaten at Reuben’s in Franschhoek when Reuben Riffel was present in the kitchen, and when he was not. The difference was noteworthy.

And what about shifts in focus at the top? I recall visiting Bukhara several years ago when the company was opening its first Haiku Asian Tapas. There was a distinct drop in quality.

This phenomenon of expansion by a powerful few is by no means a current trend, nor a universal one. It is not typical of Johannesburg chefs, for instance.

Yet The Big Three seem to be pulling it off. Perhaps it’s down to economics: when Dale-Roberts, Tomlin and Jardine put their money and brands on the line, they have the most pressing of incentives to make sure every new venture works.

But a brilliant chef is not necessarily brilliant at business. Instead, it would seem that what Dale-Roberts, Tomlin and Jardine are brilliant at is mentorship.

“Mentorship is vital,” Dale-Roberts told me earlier this week. “The passing on of knowledge and inspiration gives me the most joy now.”

Cole rose through the ranks under Dale-Roberts at The Test Kitchen. He worked alongside him for three-and-a-half years. When Cole takes the reins at Salsify, he will be a thoroughly known entity; a proven star.

Interestingly, Jones worked with Dale-Roberts for nine years, both at La Colombe and The Test Kitchen, before taking over Chefs Warehouse at Beau Constantia.

Tomlin told me this week it was his “responsibility … to teach as much as possible”.

He said that “both as a Chef and a business owner” he was committed to giving “our young chefs and all our other staff a safe and happy working environment … and to give good advice and direction to them all when they decide to move on in the industry.”

JP Van der Haar, the new head chef of Thali, has worked with Tomlin for the past four years.

Jardine told me that he and his staff “share our knowledge and experiences and everybody learns from everybody”.

He said his restaurants were “positive mental environments; we encourage our associates to grow and develop… expansion creates space for new growth.”

It makes sense that expansion creates space for new growth. But as Jardine himself said: “Our brand is only as good as the people working and operating it for us.” Are The Big Three’s annointed chefs able to maintain the brands?

The competition judges say they are. Head chefs like Wesley Randles (The Shortmarket Club), Freddie Dias (The Pot Luck Club), John van Zyl (Thali) and David Schneider (Chefs Warehouse at Maison) have been lauded at the highest level.

Dale-Roberts told me it was “absolutely true” that the successful expansion of his brand rested significantly on his ability to trust and respect his head chefs.

The optimist in me would like to believe that the winning ingredient for Jardine’s, Dale-Roberts’ and Tomlin’s current expansion is successful mentorship.

Randles, of The Shortmarket Club, was an opening staff member at The Test Kitchen. “He was my sous chef,” Dale-Roberts said.

A fine dining kitchen has a clear hierarchy. To reach the top a chef must have talent, and he or she must master skills. But a promising chef can be broken by a bully. In order to reach full potential, a potential star must be nurtured. This is the difference between mentorship and training.

“We need to continuously make space available for this to continue … Trust is key,” Jardine said.

Jardine named “a few personalities in the industry who have passed through our doors over the years”. These included: Eric Bullpit of Pierneef at La Motte; Simon Witherston of The Shortmarket Club; Dale Stevens of Faber at Avondale; and Andrew Nicholson of Singita.

Ash Heeger, of Ash and Riverine Rabbit fame, and Angelo Scirocco, of Wood & Fire in Pretoria, both worked under Dale-Roberts.

Tomlin is well-known for launching young chefs. When Tomlin owned Banc restaurant in Australia, he had “some very talented young chefs in my team … who went on to open very successful restaurants”.

Before he opened Chefs Warehouse in 2013, Tomlin spent three years running a cookery school of the same name.

It would seem that Tomlin’s legacy will be even more impressive when he hangs up his apron here. He runs what he calls a “cross-pollination system” with the Singita and Chefs Warehouse kitchens. Promising Singita chefs are sent to Cape Town for work experience and rising Chefs Warehouse stars are given new areas of responsibility in Singita lodge kitchens.

“It exposes our chefs to each other’s working environments and is a great way of exchanging ideas and building great relationships,” Tomlin said.

In South Africa, skills development is not just the right thing to do; it makes business sense. The most promising chef is not necessarily the most qualified one. It makes sense to constantly be scanning as many kitchens as possible for the most stand-out talents, even at junior levels.

Tomlin said he believed in “finding the right people and giving them freedom and opportunity”.

Part of this was staying out of the limelight when a mentee started making his or her name.

“It is important for me that everybody gets credit for what they do and rewarded for what they do. I am not a big fan of chefs who claim to run multiple restaurants without giving credit where credit is due,” Tomlin said.

Dale-Roberts agreed. Despite the fact that he was recently involved in reworking the whole menu at The Pot Luck Club – and that he acts “as a sounding board” at The Shortmarket Club and Salsify – he believes in collaboration, not domination.

“It’s important,” he said, “because these businesses are joint ventures with the chefs. They must feel responsible and have autonomy. Without this, over time they will feel stifled.”

The Shortmarket Club moves to Johannesburg

After a series of pop-up restaurants in Johannesburg, leading chef Luke Dale Roberts will be opening The Shortmarket Club JHB on a permanent basis at 1 Oxford Parks in Rosebank,...