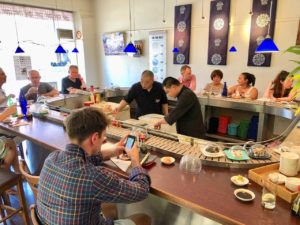 “The food here is famously delicious” – 1890 House of Sushi.

This is impressive: it’s the hottest day of the year – my car thermometer says 40 degrees – but 1890 House Sushi in Observatory is full at lunchtime.

Sensible people do not eat raw fish in 40 degree heat, especially in a scruffy location like this.

We are a stone’s throw from Lower Main Road – that’s Observatory’s drinking and eating strip. 1890 House – named for the age of the building – is located diagonally across the road from the liquor store and between two of the studenty suburbs’s most bohemian institutions, Café Ganesh and A Touch of Madness.

All credit to the chefs at 1890 House that 18 years in, they have not been budged from the centre of their horseshoe conveyor belt. Six days a week, they make fresh maki, nigiri, roses, sashimi and salads for both lunch and dinner.

The food here is famously delicious. Sandalene Dale-Roberts, wife of acclaimed chef Luke, is a fan. The chefs are traditionally trained, and every morsel is an exercise in flavour balance. Over time, the menu has changed somewhat, offering more vegetarian options.

The seafood salad is masterful. It’s a tangle of noodle-like khaki strands flavoured with sweet vinegar, sesame, ginger, and chilli. The texture of the seaweed is wonderfully unique, like bendy, blanched vegetable stems. The taste of the ocean comes through strongly but the heat of the chilli, the depth of the sesame and the dancing notes of the vinegar and ginger are far from tentative. The spring onion garnish is fresh and sharp. 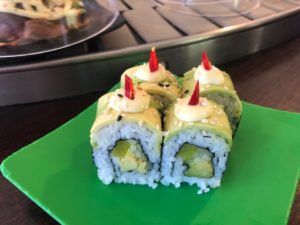 Is it necessary to rely so heavily on salmon, tuna and prawns when the vegetarian rainbow roll at 1890 House of Sushi is so good?

I adored the vegetarian rainbow roll. The first bite was surprisingly sweet. The sweetness came from the mayonnaise, the rice, and the sesame seeds – but also from the deliciously pickled radish in the centre. The nori seaweed and the avocado added salt and creaminess respectively. The mini batons of cucumber in the centre added coolness and crunch.

On the other side of the conveyer belt, I notice a man order two plates of rainbow rolls, along with a bowl of vegetables in black bean sauce.

Tasting what the chefs at 1890 House are capable of doing without the old nineties standards of raw salmon and tuna made me wonder if there’s been enough change at 1890, and at other sushi restaurants.

The menu here is dominated by the following: Norwegian salmon, sashimi-grade tuna and prawns. There’s no question that diners adore these three meats, but why are the sushi chefs here – and elsewhere – not making more of an effort to steer their clientele towards more sustainable options? Indeed, why are 1890 regulars – many of them NGO-workers, academics and all-round progressives – not requesting more sustainable options, like Yellowtail, Albacore tuna and vegetarian sushi?

SASSI (the Southern African Sustainable Seafood Initiative) has Yellowtail and Albacore tuna – also known as Longfin – on its green list.

By contrast, local Yellowfin – 1890’s regular tuna – is Orange-listed (“Think Twice”) if caught on a longline. Deep-sea longlines don’t snag just tuna, of course they don’t. The bycatch includes other fish and seabirds.

In 2016, 1890 House posted an image on its Facebook page of a 100kg Bigeye tuna. SASSI reports that in the same year, the catch on longlines set for Bigeye tuna was 60% shark. Bigeye caught in the Indian ocean is Orange-listed. Caught in the Atlantic ocean, it is red-listed (“Don’t Buy”).

1890 House serves farmed Norwegian salmon, grown in sea cages in deep coastal fjords. Norwegian salmon – like Scottish and Alaskan salmon – are types of Atlantic salmon, a SASSI orange-listed fish. Millions of salmon are farmed every year in cages at sea. Naturally their waste and the diseases they catch are a danger to the sea environment in which they live.

Prawn trawling along the sea bed threatens endangered, threatened and protected species, including turtles. Prawn farming has wiped out a quarter of the world’s mangrove forests. Kiddi Shrimp from India, Pink Prawns from Mozambique and Indian Shrimp are all red-listed.

Now consider 1890 House’s popular Mixed Platter. For just R230 one can enjoy 26 thick slices of fish, including four tuna rolls, four salmon rolls, two prawn nigiri and no fewer than twelve thick sashimi slices of salmon and tuna. Is this not the fish equivalent of the 750g steak? Isn’t this a little, you know, last century consumerist?

I have no doubt that 1890’s chefs have the kind of inventiveness that would allow them to be versatile. There are some unusual items here. The bean curd roll with prawn mayonnaise topping is comfort food on a new level: sweet, soft and childish.
The bamboo roll is generous, with a clean and sophisticated finish. The seared, spicy tuna rose has the look and feel of rare roast beef. There is something of the braai and the carvery here that would sing to pescatarians secretly longing for farmyard flesh.

Even if there weren’t ethical issues around luxury fish, from a foodie point of view, it’s exciting to try sushi that looks and tastes different to supermarket rolls.

The wine list at 1890 is unremarkable. However, Japanese sake, Chinese wine, and Tsingtao beer are available.