The popularity of Bao Down suggests that the hip crowd is back on carbs. And not just any carbs. Bao buns are the naughtiest of carbs: very white and very soft; the slightly sweet dough employs a flour so fine it sticks to your teeth.

Bao are a kind of street food, most popular in Taiwan but eaten in most parts of China and Indonesia. The bun is steamed and folded over a filling. It’s not unlike a palm-sized burger, a mini slider, or a taco.

Gun bao actually looks like a burger. There’s a meaty layer of saucy pork belly, a wodge of pickled mustard greens, a sprinkling of peanut powder and a garnish of fresh coriander. Because bao are only open on one side they’re ideal for take-away. Deep-fried bao are even more portable: there’s now way for the filling to escape.

At Bao Down, the buns are little. That’s because this is a small plates, sharing restaurant. The pork buns and deep-fried prawn toast are scone-size. Chef Graham Oldfield, former head chef at Chefs Warehouse & Canteen, has nailed the bao comfort factor.

The prawn toast is deep-fried, crumbed, with a hard glazed base that reminded me of a brioche. The bread is fluffy because it’s made with both yeast and baking powder. The prawn filling is sweet and moreish.

These prawn toasts are relatives of singjian bao, typically a breakfast bao served with vinegar for dipping.

In Taiwan – and especially Tai Pei, the bao capital of the world – it’s usual to serve sit-down bao with condiments that allow the eater to make up their own dipping sauce. There’s a ceramic dish for vinegar or soy sauce. On hand are various types of chilli and garlic pastes. It’s not uncommon to also get oils or infusions, fresh coriander and leeks – even sesame oil and other flavourings.

Thankfully, Oldfield has created a dipping sauce for us. It’s fresh and salty, with soya, garlic and lemon.

The portion of lemon mayo served with the prawn toast is genius: It’s like adding cheese to a burger. Eat at Bao Down for this dish alone. Even if you’d never heard of bao, you might imagine that Oldfield‘s prawn toast is the culinary love child of New York pizza and tuna sashimi. I can’t think of anyone, of any age, who wouldn’t love it.

Oldfield’s pork buns – a simplified version of gun bao, with exquisitely-cooked slices of pork belly, homemade barbeque sauce and a slice of cucumber – are an unqualified delight. The second your teeth sink in, it’s clear there’s an experienced chef in the kitchen. The meat is crispy, juicy and tender. The sauce is what monkey gland sauce could be, but isn’t: the sweetness of slow-cooked onions; the meaty-smokiness of braaivleis with a ping of fruity intensity. The ingredients might include hoi sin sauce, plum sauce, soy sauce and smoked Sichuan pepper. Regardless, it’s a triumph. 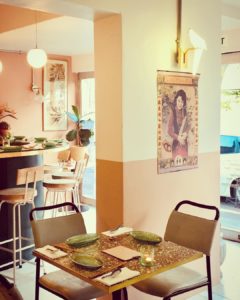 Bao Down says it’s an American-Asian fusion restaurant. Most of us would be hard-pressed to see the American influence. Bao Down is in a pretty road above the Gardens Centre. There’s a Vespa parked outside; a sage-green mosaic wall behind. The scooter, the mosaic and the terrazzo tables look Roman to my eye, but I think Oldfield and his wife/co-owner Philippa Oldfield were going for an adventurous-urban look (or, in the language of the middle-aged: “hipster-chic”). This referencing makes sense, if you consider that the American influences here are almost certainly David Chang of Momofuku, Christina Tosi of Milk and Eddie Haung of BaoHaus.

Chang literally introduced the Western world to gua bao, being the first restauranteur to put it on a menu outside China. This was in New York in 2004. Around the same time, Tosi, who was working under Chang then, invented a pie for the staff meal. Her colleagues named it Crack Pie. The dessert made it onto Chang’s menu. When Tosi left Momofuku to open Milk in 2008, her Crack Pie was one of the desserts that had New Yorkers queueing outside her door.

By 2009, bao were being sold on the street in the US. That year, Haung opened BaoHaus in New York City.

At Bao Down, the choice of bao is limited, and that was a pity – but then I don’t have an issue with white bread. Perhaps some diners still do. The Oldfields currently offer seven “mains”, four “sides” and a single “dessert of the day”.

The cucumber salad was the best of the side dishes we ate. The dressing was zesty but balanced and the toasty whole spices on top – the sesame and black sesame seeds – were freshly roasted, with all the fragrance and crunch that implies. I’ve eaten a similar cucumber side in Chinatown in Cyrildene, Johannesburg. It’s a beautiful complement to a rich, starchy bao.

Our other side, the kimchi, was like a cross between kimchi and Indian carrot salad. The Oldfield kimchi isn’t the lumpy, oily, fermenting cabbage mix that – like pungent achar or the hottest peri peri sauce – is an acquired taste.

There were some disappointments among the mains; the trout sashimi chief amongst them. This was a pity as it was our first dish. The ponzu dressing and thickly-sliced pickled jalapenos overpowered the natural taste of the raw fish to the extent that one wondered if had once been frozen.

The deep-fried cubes of cauliflower cake were stodgy. The complete dish – with cauliflower florets, edamame beans and Sichuan chilli paste – was overcooked and oily.

The aubergine with toasted sunflower seeds, red onion, miso sesame seed dressing and coriander was delicious, if overly reminiscent of an Ottilenghi salad. We would have preferred to eat this dish off a bigger plate. It was layered in such a way as to hide the aubergine. Also, the thick slices were difficult to eat with chopsticks.

Presentation is an issue here. The vintage-vibe mint and blush décor is so well considered you’d expect every dish to be as pretty as the pork bao or prawns toast. This is not the case. I understand the constraints: In a single room there are 18 seats at tables and 10 seats at the bar. Each diner will order several plates. The plates must be small, and full. But there must be a way to do the cauliflower and aubergine dishes better. At the moment, the food aesthetic is not in line with the interior design.

On the upside, seeing the small plate vegetable side dishes and bao on the table together reminded me of a Sunday braai, and maybe that’s part of why Bao Down is so popular. Here, instead of a boerie roll with green salad and grated carrot we have beef tataki with Asian herb sauce, extra bao, greens with an “octo” (eight fresh ingredient) dressing, alongside carrot and cabbage kimchi. We recognize the basics, but the flavours are new.

My dining companion and I were divided on the lemon miso pie. I had an image in my mind of Tosi’s crack pie: a perfect russet triangle, with filling clearly distinguished from crust. Bao Down’s crack pie, I felt, was cluttered with cream and not a sprinkling but a mound of salty miso cornflakes for decoration. I thought the presentation, the recipe and its execution could be improved.

My friend pronounced the crust “delicious”. She’s made crack pie herself so she could tell the biscuits were handmade and crushed for the crust. The filling, she told me, involved infusing the milk with cornflakes and sugar. She was impressed with the lemon and miso mix – although she was disappointed it was covered with double cream. The cream itself impressed her since it was closer in texture to clotted cream than double cream. Overall, she was delighted that Bao Down was serving something other than the standard fine-dining desserts of chocolate brownies and crème brûlée.

Which brings me to the other reason why I think that crowd of people was standing on the street waiting for a table on a Thursday night: it’s the authentic Asian flavours. Bao Down serves Chinese food, but it couldn’t be further from the stodgy, 1970s Chinese take-away standards of MSG-laden chop suey and egg-fried rice.

What the Oldfields are doing is fresh, authethic and punchy. The flavours and cooking techniques are unusual for us, and in the hands of Oldfield, we are able to distinguish separate ingredients while appreciating the balance he achieves.

I just wish he would make more bao. All bao have the clam-shaped – or “lotus leaf” – bun in common, but there’s a big variety out there. Mantour are plain buns, sometimes deep-fried and dipped in condensed milk. For tang bao, the bun is folded over and closed except for a hole in the top. It’s filled with broth and pork – and served with a straw.

Bao are easily confused with hirata, which are steamed Japanese buns. They are related by nationality to Chinese dumplings, and the mini Chinese dumplings served for a Dim sum tea brunch. The essential thing to remember is that bao are casual, like a zarm, a tramezzini, a hot dog.

At Bao Down, the service is friendly and attentive. The restaurant does not yet have a liquor licence. Guests are invited to bring their own wine.
Because of its size, Bao Down does two sittings, one at 6pm and the second at 8.30.