Restaurant review: Between Us, Cape Town

Let’s talk about Cape Town restaurant prices; more specifically the price of posh restaurant food. Is it as bad as you think?

Consider the Toronto, New York and London diners who recently raved about Between Us on Tripadvisor. At home, R280 will buy them two burger meals at McDonalds. A meal at a fine dining restaurant will set them back up to twenty times that. 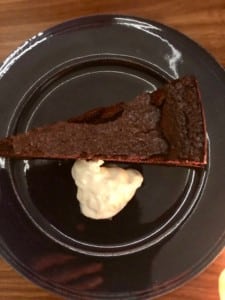 “Proper” – the chocolate cake as served at Between Us.

The chocolate cake at Between Us would be a knock-out anywhere in the world. People would queue around the block for it in New York. The top is crisp like a brownie; the inside is nothing like that childish, undercooked, overrated confection. This is proper cake: even-textured and neither cloying nor claggy. There is a suavity to this cake that may be the result of olive oil or ricotta – or both. It seduces with light texture before the flavour rushes in like liquid. The taste is neither bitter nor sugary; it does what chocolate should do – namely, suspend you on a melting cloud between the two. The Friedberg’s cake is boldly named “nemesis”, after the River Café’s famous chocolate cake. It deserves the association.

The poached rhubarb with crème anglaise would be a star on any London gastropub’s pudding list. The raisins are a genius addition to the topping; the anglaise is what brûlée lovers want: rich yellow creaminess, here with the addition of whole vanilla.

Both desserts are overly generous; enough for two to share.

The contemporary urban look of Between Us would travel well too. Outside, Table Mountain is so close as to be almost present on the terrace. The city streets twinkle below. Inside, the walls hint at the history of the building: a patchwork of exposed brick, stone and different-coloured plasters. The interior style is modern-chic, elegantly restrained, like the Art Deco-inspired sign on the terrace.

The space is decorated with large, exotic blooms and angled hoop lights. The owners of Between Us are Jamie and Jessie Friedberg, twin sisters in their twenties. The restaurant is as stylish and as almost-impossibly good-looking as the sisters.

Despite their young age, Between Us is not a new venture for the Friedbergs. They owned the city coffee shop Skinny Legs & All before this. Between Us has been open for breakfast and lunch for a year. It recently expanded operations to offer dinner.

Sadly, for our could-be Christmas-in-July dinner, Jessie is not running front-of-house and Jamie is not in the kitchen. Last time I saw them was in April. They were hosting a pop-up shop, handing out meatballs and cakes to the crowd. Jessie was wearing a vintage party dress.

The ricotta and marjoram gnudi – a room temperature, starch-free dumpling served with exquisitely complex olive oil and garnished with deep-fried leaves – is a show-stopper. The dumplings are creamily soothing; the olive oil is grassy, lemony, buttery. The crispy garnish is delicate but essential: an intense herby taste and crunch that accentuates the smooth luxury of the dumplings and the oil.

The burrata with caponata and tomato confit is a large starter dish centred around a bright white mozzarella egg stuffed with ricotta. It has novelty value but though the cheeses were both high-quality, smaller eggs would have been a better fit with the general sophistication here. The caponata and confit were tasty and summery but unremarkable.

Unfortunately, there were some disappointments that might have been prevented by the owners opting to hand-hold during this early phase of night-time service. The rosemary bread – served to us brown, dry and rusk-hard – had to be sent back.

The mains menu is dominated by red meat: beef fillet, raw beef, roast lamb, beef brisket and oxtail. For vegetarians, there’s a porcini mushroom risotto (another echo of The River Café) or a cheesy lemon pasta. The “local” octopus was recommended to us with a smile – a moment that made us wince. We couldn’t bear to ask whether the octopus was caught in False Bay, where several whales have been entangled in octopus ropes and eight have died as a result. Octopus fishing in False Bay was halted by government last month.

The beef brisket was promising, with its first bite of sweet, roasted onion, salty aioli and tender meat. The roasted green beans were sweet and delicious too. But again, I found the portion size over-generous and parts of the meat were dry. The black olive aioli had a taste (and a look) of taramasalata.

The seared, grass-fed Chalmar beef fillet with charred aubergine was decadently rich, with a strong vein of Parmesan flavour threading through the deep meatiness of the steak and the smokiness of the vegetable.

The salmon with linguine was tasty but on the dry side and the roast lamb with vegetables, gravy and mash was a pleasing, Mediterranean-style carvery meal.

The service was attentive but one felt the absence of the sisters. It would have been nice to have Jamie’s eyes on the pass and Jessie nearby, to congratulate the owners on their expansion and successes, particularly in the desserts department.

The wine list separates “heavier” whites and reds, which is useful at dinnertime. For pre-dinner, four differently flavoured GnTs are available, along with five local craft beers. The apricot and sumac drink is alcohol-free.