The social media hype around Bones Kitchen & Bar is peaking. In the past six weeks it has been reviewed by scores of Cape Town diners on three sites: TripAdvisor, EatOut and notably, the closed Facebook group Cape Town Restaurants – The Good, the Bad and the Nastyyyy.

Diners can’t stop raving about the deep-fried Parmesan balls in mushroom ragout. The pork belly is unbelievable. They’re mad for the churros and delighted by the friendly managers.

In the past six weeks alone, Bones in Woodstock has been reviewed more than 30 times on The Good, the Bad and the Nastyyyy. Some of the reviews have received upwards of 100 comments. If you search “Bones” the posts run on, screen after screen, all the way back to October last year when the restaurant opened. Combined, the number of posts and comments is well into four figures.

Of the very few, scattered criticisms, none have been more severe than a comment on noise levels and a reviewer saying she was “underwhelmed”. Someone else found The Palms parking lot “spooky”.

On TripAdvisor, there are 66 diner reviews of Bones. One reviewer rates it average, one rates it poor. The others rate it very good (12) or, in the case of 52 reviewers – a eyebrow-raising 80% of the group – excellent.

This is staggering. Is there a bandwagon factor at play here? Or could Bones just be that good?

I thoroughly enjoyed the carpaccio starter. The beef is from a farm in Bredasdorp. It was soft and flavourful, complemented by teeny enoki mushrooms, parmesan crisps and shavings, and roasted baby tomatoes. There was a strong sugary element to the dressing that complemented the intensely savoury tastes of the other elements. Here, as in so many dishes at Bones, there is a focus on the crowd-pleasing umami flavours found in red meat, strong cheese, mushrooms and deeply flavourful stocks and sauces.

The name Bones actually refers to the bones that are used in the base of any good stock – and the stocks that are reduced to make truly excellent sauces. 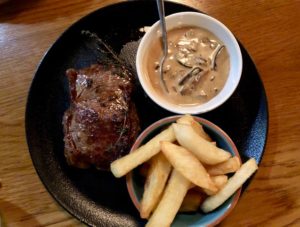 Chefs Bella McLoed (formerly The Brasserie in Tokai) and Brendon November (formerly La Colombe and Bistro Sixteen82) are technically excellent. The wild mushroom risotto was perfectly textured and richly flavoured. The pan-fried steak was faultless. The Parmesan bon-bons were as decadently cheesy as expected; the mushroom ragout was creamily moreish.

Nothing about Bones is new or challenging. The fact that you can order a side of truffle-infused mac‘n’cheese alongside your steak or burger tells you all you need to know about the food concept here. Everything on the menu is safe, nostalgic and highly indulgent.

Consider my dessert: a homemade waffle with roasted marshmallow ice cream, salted caramel sauce and slab of homemade roasted marshmallow. How ‘70s retro? In concept it is half deconstructed ice cream sundae, half braai pudding. It’s a rich dessert but McCloed and November hold back on the sugar, they make the waffle light enough and the sauce salty enough to balance the dish.

It’s interesting. Marshmallows and mac‘n’cheese might seem childish, but this is comfort food intensified with cheffy skill and ingredients.

A very important feature of the Bones experience – often mentioned by online reviewers – is the highly engaged attitude of the staff, led by manager Neil de Klerk.

Apparently, this food and this service is what Cape Town diners desire – rather deeply, as it turns out.

Bones owner Rudi Minnaar has not chanced by accident upon this “sweet spot”. He is a restauranteur of many, many years experience. He owned The Moosehead in Rosebank, Johannesburg. He bought 220-seater Morton’s On the Wharf in 1992. He owned Beluga from 1999, and ran both Pastis and Bertha’s in the early 2000s.

That Minnaar has won so many fans in spite of the fact that his restaurant is, in the evenings, the only point of light in a deserted shopping centre is testament to the power of his concept.

Minnaar and his team occupy a space between fine dining and upmarket steakhouse. I’d call Bones a gastro-pub, except that the focus – despite the name – is on the food offering, not the drinks.

The cocktail menu, for instance, leans away from sour or bitter towards soothing comfort drinks. There’s the hot-buttered rum cocktail and the espresso martini with vanilla and hazelnut. The whisky sour is all warm, soothing tastes, textures and smells. There’s a froth on top and a Christmassy aroma of nutmeg. The martini is served in a glass that is not classically conical but wide and shallow, like a Peter Rabbit porridge dish. The olives are uncomplicated: just as salty as the sea.

The wine menu is average length, with a focus on affordability. A sommelier might have been able to suggest wines that would stand up to rich and buttery dishes. When we asked for a recommendation the manager said: “What do you like to drink?”

This seems to be the ethos at Bones: we’ll happily serve what you’ve loved your whole South African life. In the kitchen, we’ll make your favourites taste better. It’s not a “global” or trendy approach. It might seem old-fashioned. It might be. But boy, does it fly.