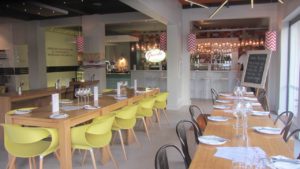 The dessert board at Graciales might come as a surprise: A rich, fresh chocolate truffle, a lemon tart boasting all the right contrasts and a Turkish Delight good enough to convert those of us who’d normally shun it.

Why the surprise? Well, because Graciales markets itself as a casual place to socialize over a drink and a snacky supper. It’s one of four eating and drinking venues at Peddlars & Co in Constantia. Looking at the Scandi-inspired décor and cocktail and craft beer lists, you might think Graciales isn’t much more than a hipster-inspired venue for a sundowner.

Not so. Chef Brad Ball, formerly of Bistro Sixteen82, recently took over all four kitchens at Peddlars & Co. For the five years Ball was at Sixteen82, he won accolades for his “small plate” sundowner meals.

Ball’s experience and expertise is evident in the sharing plates at Graciales.

Take the beef tataki with soya, chilli, lime and ginger: The meat is cooked to perfection, pink within and almost crispy at the edges. The ginger is freshly minced. Thin slices of radish add crisp, white heat. The soya is earthy; the lime and chilli zing. This is a very good thing to eat in winter with red wine, but it might be even better, in slanting sun, with a craft beer.

The grilled calamari with chimchurri is delicious. Squid is in danger of becoming a cliché on tapas and small plate menus. It’s an obvious choice. But Ball’s use of the Argentinian chimichurri sauce – as opposed to boring pesto or becoming-boring salsa verde – is inspired. Chimichurri is traditionally served with grilled meat. It’s fresh and sharp with garlic, oil, herbs and a hint of vinegar.

Don’t expect prawns on this menu. Ball is passionate about sustainability. Since 2012, when he was recognized by SASSI (the SA Sustainable Seafood Initiative) as a Trailblazer chef, he hasn’t served any fish or shellfish that doesn’t appear on SASSI’s green list.

Chicaronnes are like pork crackling: dehydrated pig skin, deep-fried and salted. My only criticism of Graciales was that my pork nuggets tasted like they’d been fried in stale oil.

The red lentil dhal and aromatic chickpea salad were unexpected treats. The dhal was comfortingly smooth and gently spiced. The lentils offered quiet amidst the busy flavours and rich tastes of the other dishes.

The aromatic chickpea salad was fresh with herbs and slightly fruity, a good complement to the pork. Unfortunately this was the only salad on the menu. It would have been nice to order a light green salad or vegetable dish – especially as Peddlars grows fresh veg in a plot alongside the restaurants.

The wine list features “Constantia Valley & Neighbours”. It’s an unpretencious list, but Ball’s knowledge of the region shines through.

The cheffy cocktail menu is pretty thrilling. Ball offers twists on classic cocktails in drinks like an Amarena Old Fashioned, Peach Ratafia Collins and Honey Bush and Green Apple Sour. I’d like to try all of them – oh, and also Death in the Afternoon and Basil Melon Daisy.

The bar itself is a little on the reflective side. Shininess is a problem in the décor throughout the redecorated Peddlars. The subway tiles are trendy but not very cosy at night. The same goes for Graciales’s sleek wooden tabletops, geometric scatters and yellow moulded chairs. Perhaps the interior designers were picturing a roomful of tanned goddesses and Adonises at magic hour during season. Each one was holding a craft beer in a very tall glass or an ombre cocktail … but tonight there’s just a scattering of diners. Some of us might trip the light fantastic in summer, but at this moment we’re wrapped in so much fleece it’s hard to tell.

In summer, the Graciales grazing boards will probably go down well. The three are roughly themed along the lines of Turkish meze, Italian antipasta and Spanish tapas.

I’d recommend that the tanned beauties leave space for dessert, even if they are going trail running or appearing in a shoot the next day. Ball’s smooth, soft, sticky pink Turkish Delight is worth every calorie.