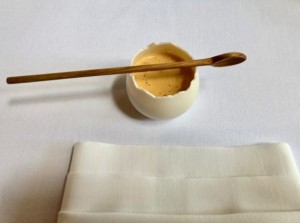 Chef John Norris-Rogers of La Petite Colombe might start a new craze with his chawanmushi, or Japanese egg custard.

Served as part of the restaurant’s “snack” course, the buttercup-creamy liquid arrives warm, in an egg-shaped bowl. The edge of the bowl is rough, like the top of a soft-boiled egg that’s been sliced open for a child.

Inside the steamed egg custard – that in Japan is made in a teacup and served as an appetizer – Norris-Jones has secreted morsels of a soft chicken wing and the sweet and sour flavours of a teriyaki grill.

Norris-Rogers’s chawanmushi is comforting, like buttery slow-cooked scrambled eggs, and exciting, with its umami flavours of dashi, soy sauce and mirin. The presentation is exquisitely simple, with just the milk-white cup – ungarnished – and a long, wooden spoon.

The influence of Japan is evident in several of the dishes Norris-Rogers serves for his seven-course lunch – not surprisingly as he recently travelled to Japan. The famous bread course features a delicious butter flavoured with miso. If the presentation of the chawanmushi was impressive, the presentation of the bread course is at the level of art, with the butter that poses as baby corn being almost indistinguishable from the real thing. The perfect rounds of bread roll, dish and plate draw attention to the mini mielie’s ‘natural’ shape and structure.

My dish of the day, the fish course, also featured typically Japanese ingredients: tuna loin and avocado. The crumbed and deep-fried avocado was a highlight of the meal. Avocado has the potential to be much more than a salad ingredient, but it can quickly turn from delicious to warm to (frankly) disgusting. Here, the avocado was unmarked, with a subtle taste of liquid cream. The avocado flesh was not heated but the crumb was warm and crunchy, fragrant with Malay-style herbs. It was a perfect complement to the expertly seared tuna, the fruity chutney, peppery raw salad ingredients and coriander cream.

An optional addition to the set menu was the ramen course, served at the “chef’s table”. Here, a dish of noodles, scallops, pork belly, celeriac stock and umami ingredients was assembled. Most impressive was the dried, fermented and smoked skipjack tuna loin. This rock-hard katsuobushi was shaved and sprinkled over the dish for garnish.

Norris-Rogers manages to thread a number of food themes through his spring menu. In addition to Japanese tastes, he plays with the theme of comfort food. The other “snacks” served alongside the chawanmushi were a porcini and hazelnut “lollipop” and a teeny cone of smoked snoek pâté topped with curried labneh “soft serve”.

The “treats” course offered three after-dinner delights: whisky -flavoured marshmallows (torched at the table), coffee macarons and a smoky dark chocolate dessert presented as a cigar in a nest of dried tobacco leaves.

Norris-Rogers is technically brilliant. His skills are in evidence throughout the meal – but those who like a bit of classic culinary skill will not be disappointed by the steak, veg and gravy course.

Another theme, and a very welcome one, is regional food. The chutney, snoek and Malay spices at the start of the meal lead to pumpkin in the main course and pineapple and coconut in the dessert course. The regional tastes work well with the local wines selected for the restaurant’s famous wine list.

Our sommelier suggests the Haut Espoir Cabernet Sauvignon 2012 for the beef course; the foamy sake and Japanese citrus cocktail was a delicious welcome drink and the Morena Brut Rosé we drank with our “snacks” was complimentary.

La Colombe in Constantia has long been a giant in fine dining. This month it beat out Wolfgat, The Test Kitchen and The Restaurant at Waterkloof to be named EatOut Best Restaurant.

La Petite Colombe was placed sixth in the country.

All the restaurants in the La Colombe group featured at the awards ceremony. Foxcroft and Protégé, which is situated alongside La Petite Colombe in Franschhoek, were both among the 30 restaurants nominated for the best restaurant prize.

Interestingly, the group’s achievements come at a time of significant business expansion.

Next month, the group will open Epice, a new restaurant in Franschhoek to be headed by former La Colombe sous chef Charné Sampson.

Norris-Rogers has been head chef at La Petite Colombe since it opened in Franschhoek more than two years ago. He, like Sampson, started at La Colombe under executive chef James Gaag. Norris-Rogers also worked under former head chef and current group head, Scot Kirton.

The La Colombe group appears to take teamwork and staff advancement as seriously as it takes food and wine.

There aren’t many fine-dining restaurants I would describe as friendly. It’s one of the things that sets La Petite Colombe apart.

Our waitress and I exchange a hug at the end of the meal. My husband and I leave knowing where the sous chef grew up and studied. We have met and are on first-name terms with the sommelier, the head chef, the maitre’d and the head pastry chef.

There is a welcoming and down-to-earth atmosphere at La Petite Colombe that might not be possible in the city. Here, in Franschhoek, in a dining hall that is filled with natural light and offers a view of the mountains, there is a lack of pretension that doesn’t detract from the quality of the food, but adds to it.

When the floor staff present the “snacks” hidden in a mini succulent garden, and when they talk about wine or fruit, they behave like people who know plants and meat and vineyards, not nightclubs, coffee shops and Netflix.

“We are a very strong team,” our waitress tells us. “We are very close.”

In less than a year, the team will vacate its dining room in town and move to the 68-hectare Leeu Estates, between the Franschhoek mountains and the river.

If La Petite Colombe is able to maintain its standards, and continue to innovate, South African fine dining will be the richer for it.