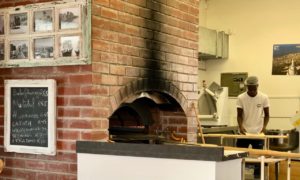 “Not a restaurant but a bakery. The food we serve is street food” – The Lebanese Bakery.

“We are small, but authentic,” says owner Chaouki Ghamlouch.

Lebanese Bakery’s menu features Lebanese street foods you might not have tried. Here, you won’t get a pita stuffed with falafel or shawarma. Instead, the flatbreads – the ka’ak, fatayer, manoush and khob’z (like pita) – are given a chance to shine.

Ka’ak is a flat oval with a hole at one end. Traditionally, the hole is for hanging. On the streets of Lebanon, sesame-coated ka’ak hang on rails ready to be stuffed with pomegranate-molasses-flavoured minced beef; melted cheese – or Nutella and banana.

“It’s like a bagel, it can be sweet or savoury,” Ghamlouch says.

The fatayer, a closed Lebanese “pie”, makes perfect sense as street food. It’s a closed triangle, traditionally stuffed with spinach or cheese. I opt for both. The baby spinach is flavoured with lemon, onion, sumac and olive oil. The cheese is a mix of mozzarella, halloumi and feta. The fatayer dough is as soft as a fresh pita, but more elastic, and with the sweetness of a brioche. It offsets the slight bitterness of the spinach mix and the slight saltiness of the cheese. It’s a gentle flavour combination but deeply comforting. It’s more-ish and dry-ish. It cries out for fresh, sun-warmed salad ingredients and a very cold drink.

The manakish is like a pizza. It can be eaten flat, or it can be folded. It’s often eaten for breakfast, and it can also be sweet, with banana and honey, for instance. Ghamlouch recommends a manakish with cheese and zaatar. This is a more muscular meal than the fatayer. The base is substantial: it’s chewy, with crisp edges. The zaatar is strongly fragrant: this is the steamy smell of wild thyme and sesame seeds that perfumes the streets of old Beirut.

The menu features two mince manoush. One is with flavoured with onion and parsley, the other with onion, tomato and pomegranate molasses. Ghamlouch tells me that it’s best to eat a meat-topped manakish immediately, with a small salad and a laban – that’s a Lebanese yoghurt drink with mint.

I do, but I already know. It’s because the meat – which is triple-minced, by the way – will make the bread soggy if it travels.

All Ghamlouch’s breads are baked in a clay oven. The doughs are made daily, cut and rested. The giant bread mixer – which uses a fork instead of a dough hook – was imported from Lebanon and Ghamlouch’s cooks were taught for three months by a chef brought out from Lebanon.

Some of Ghamlouch’s bread toppings are robustly flavoured, but his humus and labneh are surprisingly delicate. The labneh is twice as light as cream cheese. It has the flavour of creamy yoghurt with a hint of lemon. The whiteness and textural airiness defies its rich taste.

The houmous is made on site, as is everything on the menu. Pots of chickpeas are soaked overnight, boiled, peeled and blended with their cooking water. The houmous is pale and light. I buy shop houmous all the time. It can be dry, aggressively garlicky or over-seasoned. Ghamlouch’s houmous is velvety smooth, mild and light. He annoints the dip with Lebanese olive oil and sprinkles it with sumac from an unlabeled jar. Now the houmous is a perfect accompaniment to fresh bread: sloppy, fresh and earthy.

The moutabel dip is special. Ghamlouch uses organic aubergines. They are cooked on large gas rings daily. The smokiness of the dip is remarkable. The addition of tahini adds smoothness and depth.

Baba ghanoush – aubergine dip without tahini – is only made at the weekends.

A mark of Lebanese Bakery’s authenticity is that it has already become a port-of-call for the Lebanese community of Cape Town and Gauteng. There are queues for tables on Saturdays.

“When people come to Cape Town from Johannesburg and Pretoria, they come here first.”

Ghamlouch is a medical doctor, a physician of 25 years standing. He has lived and worked in Beirut, Italy and the Gulf. Ghamlouch says food preparation is “in my blood”. His family has a restaurant, he says, “but this is not a restaurant, it’s a bakery. The food we serve is street food.”

An exciting feature of Lebanese Bakery is the absence of well-known Lebanese street foods like kofta and shish kabab. Mince and halloumi are on the menu, but they appear as toppings rather than the main event: The breads are the stars.

In Cape Town, our experience of flatbreads is varied. It’s possible to buy a deliciously thick, flaky roti from Mariam’s Kitchen and a long oval pide (pita bread) from Anatoli’s. Most decent pizzerias use a brick or clay oven. But we don’t raise an eyebrow if we’re served a microwaved supermarket naan bread in a restaurant. Our standards for flatbreads are not what they are for loaves. Ghamlouch is introducing Cape Town to new flatbreads, and raising the bar for quality.