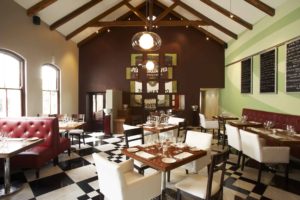 When Reuben’s is the name of the restaurant, it’s ideal to have Reuben in the kitchen.

I’ve eaten at Reuben’s in Franschhoek with Reuben Riffel present and with him absent. When he was there, the meal was worth every cent. When he wasn’t, his staff fell short of the name on the door.

It’s a big name: Reuben. It’s not just that he’s handsome, famous and rich. The reason he’s a household name is because his food is technically assured but also earthy. Here is a multi award-winning chef, trained in the French tradition, who grew up in Franschhoek eating veg from his grandfather’s patch in Groendal and fish caught by his uncle in False Bay. Riffel grew up around big family braais and his mother’s snoek-head curry.

When he’s good, he’s very, very good. The signature main is the pork belly. It’s a love poem to meat and root veg. Neither the pork belly nor the parsnip are expensive ingredients, but Riffel makes them sing with tastes of chilli caramel and ginger jus.

This is homely South African food dressed up for the ball. It starts with fatty meat, parsnip (or carrot), potato, a bit of green, a bit of heat and a bit of sweet. These are ingredients for a braai in summer, a roast in winter. They are the tastes South Africans love, particularly in the Cape where heat and sweet typically enliven meat dishes, even midweek ones.

At Reuben’s, the pork belly is pressed. The texture of the meat is as yielding as cooked apples. The meat is delicious. Pressing does away with that overpowering mouthful of fat that can be a feature of this cut. With sweetish, crispy crackling, this is the pork belly of Sunday lunch fantasies. The piped parsnip puree and crispy potato fondant complete the comfort-food dream. The bok choy, mini mushrooms, chilli and ginger let you know you’re in the hands of a chef de cuisine. I love this dish. It’s as sophisticated and cosmopolitan as a designer dinner jacket, but there’s an implied love for soil, and farms. I want to give it a standing ovation.

Reuben’s is good at flesh. My yellowfin tuna steaks (sustainably pole caught) were almost impossibly soft. The quality of the meat was exceptional. If rose pink were a texture, this is what it would feel like in your mouth.

The pork belly and the tuna steaks made me think of Riffel’s braai cookbook. I believe this is a man who takes the grilling and roasting of meat very seriously. It’s surely part of his appeal in South Africa. Riffel is quoted as saying that extended family gatherings during his childhood were marked with the smell of sizzle. It’s a braaivleis heritage that many of his restaurant guests and TV audience members share.

Riffel would not have been pleased with two steaks that left his kitchen on the Saturday night of the Franschhoek Literary Festival. These sirloins were proclaimed tough and sinewy – “nothing special” – by the men at our table.

Riffel had intended to be present on this important night for Franschhoek’s restauranteurs.

The diners next to us thrilled to their starters but were defeated by preposterously large portions of oxtail stew piled lumpily onto their plates.

That night, the service was over-familiar. Have you been high-fived by a waitress lately for choosing her favourite dessert?

The oysters – at R100 for four – were ho-hum, even with their vinegary salsas alongside. The salted caramel tart and crème brûlée were heavy. They didn’t live up to the flesh-slapping hype. It was the kind of pricey dinner that feeds into people’s prejudices about “fancy food” not being worth the fuss or money.

The next day’s lunch service was a different matter. The staff was subdued; there was a glimpse of that famous face through the kitchen glass. We tried two of Riffel’s signature starters: the chilli salted squid with a nuoc chum dipping and the blue cheese and mascarpone tart with tomato jam. The plating of the tart was worthy of an art gallery. We understood instantly why the squid starter was famous: tender and crisp baby squid bodies and tentacles with the Asian-flavoured sauce, crisp salad and lime mayonnaise. It was all there: crunch, salt, sour, sweet, freshness and luxury.

The very simple Roquefort and pear salad was pure class: rich and light at the same time.

Offal and unusual meat cuts are favourites of Riffel’s. For Sunday lunch, the Specials chalkboards offered lamb’s tongue and calf kidney dishes. This was in addition to the chicken liver starter and bone marrow served with the sirloin. Riffel’s miso-braised beef cheek, served down the road at Chamonix, is becoming the stuff of legend.

The pork belly I ate was served on the Sunday, not the Saturday night. I’m fairly conservative about meat cuts, but if Chef Riffel – with his flair for meat – was in the kitchen, I’d give any meat cut a go.