It’s not easy to make a good vegan meal. To make vegan meals of fine dining standard is challenging. You could say it’s reaching for the stars. 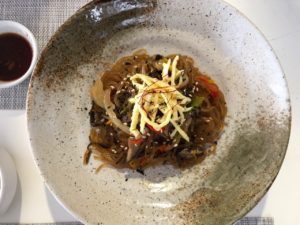 Sepial Shim has done it. Take this dish: mushroom and glass noodle japche. The see-through noodles are made from sweet potato, the sauce is soy-based; the mushrooms are shiitake and wood ear. Slivers of slow-cooked onion and peppers provide sweetness; the sauce is a triumph of meat-free umami. The dish is garnished with white and black sesame seeds, saffron threads and – for non-vegans – thin strips of omelette. The sweetness, the starch and the umami work together to make this dish a sighing comfort. Meat or no meat, it eats like a fine dining take on spaghetti Bolognese.

Sepial’s Kitchen, just fourth months old, is described as “Asia-inspired”. Korean cuisine features strongly. The restaurant itself is a tranquil white space. It forms part of Salt Orchard, a new hipster hub between Main Road and Salt River Circle. The graffiti-ed walls and shaggy young men lugging film equipment on the street form a contrast to the restaurant’s interior and Shim herself, welcoming and serene in her chef whites.

Shim is no stranger to fine dining kitchens, having worked with Salsify’s Ryan Cole, among others. “Let me feed my customers something exciting, surprising, comforting and loving,” she wrote in a recent Facebook post.

Shim is an inspiring chef, for many reasons. She is highly accomplished: her “death by chocolate” vegan cake and vegan croissants are the stuff of vegan market legend. She is inventive: she makes popcorn-flavoured iced tea and candied olives. She is warm and chatty on social media: it’s obvious that it makes her genuinely happy to feed people well. But perhaps the most obviously exciting thing about Shim is that she is the queen of kimchi.

Shim makes traditional Asian cabbage and daikon radish kimchi. She has also developed a recipe for local cabbage kimchi – “the best I’ve ever tasted” according to a Facebook comment from a former resident of South Korea.

Shim makes an astoundingly flavourful kimchi from the leaves of the perilla plant, a Korean, mint-related herb that she grows in her garden. It’s an incredible taste experience: crazily salty, earthy and deep-green leafy. It tastes like the ocean and a forest. Her other “special” kimchis include the spring onion kimchi – redolent of nostril-assaulting blue cheese – and one made of chives – grassy, lemony and hot.

These taste bombs make the refined flavours of Shim’s dishes zing. Like atchar, kimchi cuts through and elevates oily food. Shim does a slow-cooked pork belly dish that works brilliantly with a green kimchi. Similarly, Shim’s spicy tofu and bibimbap vegan dishes are glorious as they are, but with one of her kimchis they achieve fine dining status.

Fermentation is key to Shim’s aim of making “flavourful” vegan dishes. The fermentation process is what provides the umami intensity. As she says, without fermentation there is no wine, no whisky, no pickle, no miso, no sourdough, no Parmigiano and no soy.

Interestingly, Shim uses kimchi as an ingredient. Her kimchi pancake is thick and moist, with the sourness of the kimchi bringing out a sweetness in the batter. Shim makes “summer rolls” of kimchi, tofu and sautéed mushrooms and a kimchi rice noodle salad.

Earlier this month, Shim hosted a kimchi-making workshop. She sells bottled kimchi in the restaurant. UCOOK uses her cabbage kimchi and chilli oil for their boxed meals. At present, a persimmon kimchi is in the making.

But Sepial’s Kitchen is not just for kimchi nerds. The seaweed and cucumber salad is exquisite: chewy seaweed; fresh, bright spring onion; and fragrant cucumber dressed with a blend of soy and chilli oil.

The white paste in her miso broth is of such high quality it moves in the liquid like a cloud.

Shim is generous. After our meal, she treated us to squares of her millionaire’s shortbread – intensely decadent, with salted caramel and roughly textured, biscuity shortbread – as well as squares of her not-carrot-but-persimmon cake, a current experiment. The cake was moist and dense, with sweet autumn spices.

Shim is not squeamish when it comes to meat – she recently made a pigs’ trotters terrine – but she’s not a chef snob when it comes to vegan diets either. There is an opportunity at present for chefs all over the world to use their creativity and skills to unmuddy vegan cuisine. Here in Cape Town, Chef Shim is making delicious progress.

Recently, Winemag accepted a challenge to find Cape Town’s takeaways offering the best quality relative to budget. We aren’t interested in global fast-food chains. We are interested in supporting the...

There has never been a better time for take-aways. First of all, let’s not call them take-aways. When our best restaurants deliver to your home, it’s not pizza in a...

Home delivery from The Black Sheep

A few days ago Western Cape Premier Alan Winde entreated us to “support small businesses” and “order takeaways from your nearest restaurant”. My husband and I didn’t need much encouragement....