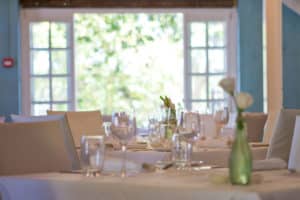 There’s nothing in the words “barn” and “village” to suggest a great seafood restaurant. Yet The Foodbarn in Noordhoek Village sets a gold standard for ethical fine dining in the fish department.

The clue’s on the door: A big sticker of the SA Sustainable Seafood Initiative’s logo with its green, orange and red fish. Chef Franck Dangereux has been an official champion of SASSI’s work for several years.

On the summer menu, just under half the starters and mains on are fishy. The mussels, squid, farmed kabeljou, monkfish, yellowtail and pole-caught tuna all appear on SASSI’s green list. Only the prawns, farmed in India, are orange-listed.

Of course, doing the right thing does not, in itself, a gourmet experience make.  Dangereux is a leader because he makes magic within a limited range.

The green and cream palette of the flash-fried squid starter is like a room designer’s mood board – the drops of green oil in the foamy fontina and truffle cream like lily pads. A whorl of nori linguine lies under other ingredients in the centre of the plate like a carefully hidden nest. This is Dangereux at his best, drawing inspiration from what he calls “gentle Mother Nature”.

The play of tastes is subtle: Japanese mushrooms complemented by the hint of truffle; edamame beans working with the green oil; the homemade linguini marrying with the nori, cheese and cream. Overall, the Mediterranean and Japanese elements of the dish conspire to show off the fresh sweetness and delicacy of the flash-fried baby squid.

Dangereux grew up along the south coast of France. Mediterranean seafood, which has much in common with the Cape’s “fruits of the sea”, runs in his blood.

A main course inspired by Pan Bagna – a kind of dressing-soaked Salad Nicoise salad – is comfort food for him. Here, Dangereux uses grilled kabeljou instead of traditional tuna.

Fresh fish tartare plays to his strengths. This is, after all, one of South Africa’s first celebrity chefs. Dangereux worked in Michelin-starred restaurants in France before starting La Colombe and shooting it halfway up the World’s 50 Best Restaurants lists. Here, raw, minced yellowtail is offered with truffled cauliflower brandade, aioli, soy and “petite” mussel fritters.

Bouillabaisse is one of those regional specialities that, like pizza, attracts pedantry. But Dangereux is originally of the Marseilles region, said to be the home of this fishy soup. He can afford to play at the margins of the dish. Dangereux sidesteps nude-heels-with-black-dresses-for-daytime type prescriptiveness by offering a “petite” bouillabaisse as a starter. It consists of a single chunk of skin-on kabeljou fillet, a plump mussel and a pink prawn in the saffron-rich, lobster red broth. The rouille sauce has been added. The cheesy crouton is on the side. This is a confidently fishy dish, with a generous hit of saffron.

Are the Foodbarn’s patrons here for sustainable fish? Probably not. They don’t look like a mad-for-the-cause crowd. Dangereux’s name and the French country décor attract local and visiting foodies. On a Friday evening, under the thatch and between the duck egg blue walls of his restaurant, the first starter to sell out was the beef raviolle with tomatoes and garlic.

My advice is to stick with the fish. Dangereux’s commitment to sustainability and his elevation of local fish are genuinely inspiring. This seems to be where his heart is, too. The sirloin with rich jus and tomato and olive tart tartin was disappointing, as was the goats cheese main. Both dishes were over-salted and over-cooked; the plating was clumsy. This may have been because we ate late. Perhaps our mains reflected a kitchen packing up for home. Whatever the reason, it was the energy and passion evident in the seafood starters that was most memorable.