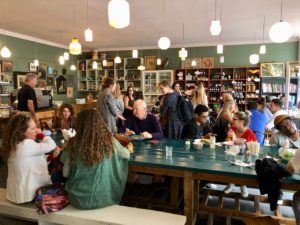 Its glass front faces out from Sir Lowry Road to where District Six once stood. Behind The Kitchen is where Woodstock Beach fishermen once caught snoek to sell to Malay cooks. On The Kitchen’s right is The Castle, that hobnail boot of colonialism. To the left: Woodstock’s Treaty Tree. It was in the shade of this milkwood – still standing – that slaves were once sold.

Dudley’s spot has been crisscrossed by Khoi farmers, Dutch land-grabbers, British colonisers and African free-slaves. It’s also been crisscrossed by sellers of fish, wheat, vegetables and spice. The lunchtime diners at The Kitchen’s windows today are descendants of these divided people, and inheritors of their food.

As a chef, Dudley practices convergence. Her purpose is clearly evident in the flavours she brings together. Her salads zing with the fruity, spicy, sour and jammy tastes associated with Malay cooking. The Brits trumpet their presence with pork bangers and gammon slices.

On a global scale, she nods to Tex-Mex salsas and bows to the Middle East, with humus, falafel, roasted brinjal and pomegranate jewels.

The success of Dudley’s converging purpose is in the eating. Simply stated, The Kitchen tastes like our city. Not just one corner of it; all of it. 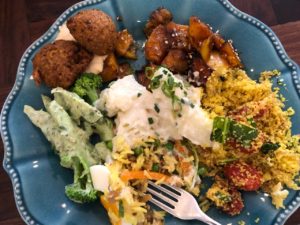 The Kitchen is famous for its array of salads.

These are the five salads I had for lunch: breyani rice; potato salad; roasted pumpkin with sesame; cous cous with rosa tomato and a blanched broccoli salad.

The pumpkin and sesame dish is vintage Dudley. The Asian flavours elevate the humble pumpkin to contemporary urban status. But there’s a boerekos-vibe here too, in the moist, sweet pampoen centres. She marries comforting nostalgia with global edge.

Dudley believes that the signature flavours of the Cape are smoked snoek, soetpatat and tomato smoor. The flavours of Cape Town run in her veins, but Dudley is not parochial. She spent several years working in Central London and Washington DC kitchens. Dudley is technically no less of a chef than some of her more lauded, fine dining contemporaries. The Kitchen has been packed at lunchtime for ten years. Dudley has not one but three cookbooks under the belt.

Her breyani rice dish makes my day. It uses the humblest of ingredients: carrot, peas, rice, yoghurt and chutney. It pays homage to Cape Town’s breyani queens, but it doesn’t compete. There are no chicken legs or lamb fat here; certainly no gold leaf. This is a family breyani, not a party breyani. And yet, very few of us could do this dish this well. The carrot is firm; it distinguishes itself texturally from the rice and peas. The rice doesn’t clump. The yoghurt dressing is as thin as a raita, but it’s still white and creamy.

Dudley is keen on brassicas. In her kitchen, broccoli is fried; cauliflower is pickled. Florets are Parmesan-crumbed. Soy is employed; the use of sesame is liberal. In this salad, the broccoli is barely blanched; it’s almost raw. Dudley has recently been experimenting with raw veg in her salads – including barely-cooked, julienned potato. In this salad, the dreamy yoghurt, lemon and garlic dressing rescues the dish from anything even suggestive of faddish deprivation. Instead, the emerald green of the broccoli and the sage velvet colour of the dressing bring to mind a lavish Victorian interior.

The yellow cous cous and rosa tomato salad is, like Dudley’s famous egg-fried rice, one of those very simple dishes that works hard on the plate. It doesn’t make a lot of noise. The cous cous grains are al dente. The use of spices is restrained. The sweet, roasted tomatoes provide deep comfort. This dish allows other salads to “show off” — to use Dudley’s phrase. It also gives tired office workers the culinary cuddle they want between their morning and afternoon’s work.

In her cookbooks, Dudley confesses that she grows “weak” for potatoes. So do I. This confidently plain potato salad – boiled white potatoes, yoghurt-mayo dressing and sprinkled chives – is an example of one of The Kitchen’s “Darts In The Garage” salads. In other words, this is a retro salad inspired by suburban South Africa food of the 70s and 80s. Dudley and her team have used ingredients that moms and grannies have been using for decades (minus – it goes without saying – the Crosse & Blackwell “salad dressing”). What makes it better? The potato. The flavour of that potato is proud. It’s been grown, harvested and cooked with respect. The texture is even throughout. The water temperature was perfect to the centigrade. For me, this potato salad signals a mature chef at work: Here, Dudley is confident in the extreme; humble in the extreme.

Eating this potato salad is not unlike seeing Nelson Mandela in a rugby jersey. Anyone can play with the tastes of their own childhood, but to venture, wholeheartedly, into the culinary worlds of others? It’s a big ask. It requires a person to swop prejudice for a fork – or chopsticks, or your fingers. Dudley is a chef who has successfully processed her city’s history.

Everything about The Kitchen – from Dudley’s excellent food to the décor to her welcoming presence – express her purpose to unite and re-form.