Tiger’s Milk sets you agog from the get-go. There’s a vintage movie theatre sign at first floor level that transports you to the set of American Graffitti. It’s that movie – all style and intelligence – not Back to the Future or Grease. There’s an undercurrent of gloom in Muizenberg that prevents even a suburban fifties aesthetic from becoming cheesy. The roughness of Muizenberg – it’s slightly grey in atmosphere even when the sun is blazing – creates the potential for retro irony all along the art deco strip of Surfers Corner. 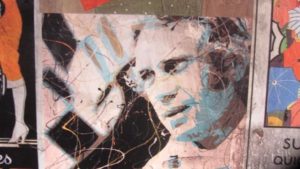 Here at Tiger’s Milk, there are doormen at street level and a staircase lined with movie stills of 1950s movie stars and models, including Steve McQueen. I wish more things in life were like Steve McQueen: beautiful, powerful and quiet. In his rebel jeans and T-shirts there’s a thrum to him that sounds like an idling Enfield.

Tiger’s Milk’s grand staircase – and its staff waiting at either end – turn up the volume on the thrum. This is a little bit LA, you’re thinking, with the tonal sweeps of sand, sea and sky at your back.

Before you’ve even reached the restaurant you’ve inhabited a confused but not unpleasant cinematic fantasy in which you star alongside – or as – an off-set SMQ.

See what restaurant owner Michael Townsend did there? This is what he does so well, and he’s never done it better than here, at Tiger’s Milk. Townsend creates excitement at being where you are. The design of his restaurants, when we’re in them, make our lives feel like movies. The décor and settings of places like Harbour House, La Parada, Live Bait and Sirocco are the aesthetic equivalent of playing loud music through headphones as you strut down a city street.

The décor at Tiger’s Milk can be summed up in one word: genius. There’s a huge gold bull’s head on an entrance wall; a vintage BMW motorbike overlooks the surf upstairs. The longest table is overhung by pendant lights made from sawn-off crystal decanters. There are wooden wall panels beloved of gentlemen’s clubs hung horizontally over the bar. There is no ceiling, the roof beams are bared. After dark, when the place is packed with jollers knocking back shots, you and Steve McQueen could be kicking back with the cast of Coyote Ugly.

This is a great place for night-time and it’s big enough to accommodate hundreds of biker boots and stilettoes. In the day, it’s a good place to watch the surfers and feel young, beer on one side, burger on another.

So how is the food? Townsend never errs with location and décor, but the quality of his meals can be variable.

On my first date with, er, Steve, he had the steak and I had the burger. Both were okay, nothing special. Ditto the wine. The bill was good and high, but we had a lovely time being glamorous. The experience was “classic Townsend”, according to SMQ.

My second supper at Tiger’s Milk was a different story. I had a hunch the starters would be better than the mains and I was right. My friend – she in a Marilyn-esque fluffy touch-me jacket – and I did the “small plates” thing, ordering almost the entire starters menu to share as supper. We demanded chicken livers, mini spare ribs, French onion soup, calamari with salsa verde, and a feta and avo salad. The bone marrow was sold out.

My Marilyn-jacketed friend, who also happens to be a chef, declared the chicken livers “excellent”. They were. Chicken livers can be velvety like few other meats. These were smoothly-textured but firm, like a dense mousse. The taste was fresh but gently rich, with a creamy peri peri sauce that tasted authentically Mozambiquan, but refined. It was a gorgeous, more-ish dish that couldn’t have been improved.

The French onion soup was a little too dark and a little too sweet, but I’m a dreamy fool. I loved the floating cheese croute and the taste of late-night Paris beneath.

The baby calamari didn’t seem to be a stand-out at the time, but it would have been if not for the focus-pulling livers. The tentacles and bodies were as tender and fresh as could be, all bursting with youth. The green-as-grass salsa verde seemed to want green chilli, but that’s not a standard ingredient so call me eccentric for even mentioning it. As a freshly-minced coating sauce this salsa verde was precisely as it was designed to be.

We thought it was bold to use an ingredient as unfashionable as iceberg lettuce in the salad. It might have been chosen for hipster irony, but we hoped it was because it did a truly excellent job of showcasing the creamy avocado and salty, nubby feta.

The waitress had raved about the spare ribs and they were very good. The meat was tender and slightly sweet. Ribs are terrifically trendy. I can’t understand why: what about the sticky rib sauce in woolly beards? I suppose it’s just me. Beyond a certain age a woman doesn’t look attractive bringing meat bones to her mouth. Also, it’s the sweetness. Spare ribs are a bit like deconstructed, rock and roll hot dogs. Regardless of the restaurant, I wouldn’t drive my motorbike through a barbed wire fence for them. However, if you like ribs these are jolly good and would go well with a craft beer.

The house wines at Tiger’s Milk are disappointing, but that’s because this is not an aesthetically suitable place for quaffing. The wine here is served in those crazy-huge glasses, like fish bowls on sticks. Lager, cocktails and shooters seem more appropriate.

The locals here have mixed feelings about Tiger’s Milk. Some find Townsend’s extravagance of gesture uncomfortable. I think he’s been working up to a big splash for years, and this is it. The décor is a triumph. If the kitchen can maintain the quality of the food, Tiger’s Milk won’t just be the ‘in’ place of 2015. It’ll become a classic. Like every SMQ movie ever made.