The first impressive wine to come entirely off the Paardeberg was a white: Sadie Family Palladius 2002 (which later started refermenting in bottle, but still!) – a blend of chenin, chardonnay and viognier that was an unprecedented creation, expressive of its origins, and the first example of perhaps the Cape’s greatest modern contribution to the world’s wine styles. Fine Paardeberg wines have been numerous since then – both those made by the great producers who have found a home on the mountain (notably Sadie, Badenhorst, David & Nadia, and JC Wickens, as well as perhaps Wightman, and Lammershoek, whose pioneering Paardeberg red I wrote about last week), and the very many wines made elsewhere from, or including, Paardeberg grapes.

One of the finest in the latter category was first made in 2017, by Chris Alheit. It was called Fire by Night – with a small subname on the label: “A note to the mountain”. I wrote about the Alheit labels and their significance a few years back, mentioning how the Alheits conceived this wine as a kind of  homage to this “mythical” mountain.

When the farm that provided the grapes for Fire by Night became available in 2019, the Alheits found the myth (and the desire to retain the source) irresistible, and bought it. I’d visited the farm once, in 2018, for the launch of the excellent Nuwedam Old Vine Chenin Blanc 2017, made from a 1974 block for its then owner, Christa von la Chevallerie (incidentally, the first wine to carry the Certified Heritage Vineyard logo of the Old Vines Project – see Christian’s enthusiastic note at the time). And just a few weeks back, I visited the farm again – more expansively this time –  on a fine wintry morning, with Chris and his consultant viticulturist, Etienne Terblanche. (“I’m about 65% good when it comes to viticulture”, says Chris, who loves and nurtures with unsurpassed passion the old vines he is responsible for, “but Etienne is about 120%.)

They’re working hard at the 20-odd ha of unirrigated, bushvine chenin (there are also 2 ha of pinotage), much of which is now going into the inter-regional blend Cartology, and some continuing to go (that’s assured, says Chris) to Donovan Rall for the excellent Rall White. The expensive, organic farming and care is most obviously shown by the mulching with straw around each vines – and the massive block of straw bales waiting to be spread. Already, “the soil is getting healthier, the vines getting stronger”, Chris says; the ridiculously low yields perhaps rising – although the benefits of the end of the drought must also be taken into account. It’s strange to reflect that these vines were planted back in the 1970s to provide grapes for the co-ops to make bulk-wine from. Interplanting of young vines where old ones have died has begun, and the first new vineyard to be planted will be of a selection of chenin material developed from Skurfberg vines.

Nuwedam as a whole is 104 ha of sandy decomposed granite at the crest of the Aprilskloof – one of the valleys running into the Paardeberg. (Standing on the edge, one looks down onto the meticulous spread of Rotsvas, the Sadie farm.) There’s some established pasture, if that’s not too lush-sounding a word, and Chris envisages some cattle grazing there soon. And there’s a rocky tract with tough renosterbos that we clambered through to reach the highpoint and its spectacular views of the Swartland. Somewhere up there, it seems, Chris’s vision is locating a dwelling-place… sometime.

For now, what prevails is the hard work of improving the soils, strengthening the vines and expanding the vineyards. There’s been one mis-step so far, but one that’s to be corrected. When they bought the farm, the Alheits wanted a single name for the farm and their chenin. Nuwedam seemed a bit dull, I suppose, and they translated the traditional name of its highest point – Besemgoedkop – to Broom Ridge. Fire by Night became Broom Ridge, with a totally new label (this time with a minuscule biblical reference to Psalms 19:7-14 instead of the Mark 4:35-41 on the older label).

That name got some flack. To me it sounded like the tired invention of a British supermarket for some Hungarian plonk on their lower shelf; a British commentator apparently thought it sounded like an Australian petrol station. And I don’t think the Alheits ever really believed in it all that much. The good news for the label’s critic is that, from vintage 2022, the name reverts to the more genuinely poetic, and thus more appropriately and characteristically intense, Fire by Night. Nuwedam stays prosaically Nuwedam. 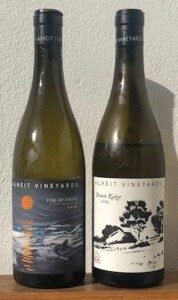 And the wine will no doubt continue to be wonderful. Chris gave me two bottles to drink – a happy task not yet quite completed. The Fire by Night 2018 is drinking well already, with a generous thatchy breadth as well as a lemon-tinged depth and focus. Broom Ridge 2019 needed a day of openness to the air to encourage greater approachability. It is an even more splendid wine, with a brilliant focus and freshness, and an intensity with a core of sweet fruit. Best give it some more time. Very fine, very Alheit, very Paardeberg – it’s easy to believe it came off these sunny, austerely muscular slopes.

I remember a wine conversation with my brother, many years ago, in which he commented that he couldn’t afford to buy the sort of wine I did. At the time,...