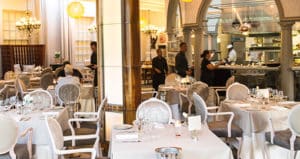 Overall, the food at Myoga is perfectly yummy, few would argue with that. It’s just that, when you’re having a five-course tasting menu prepared by Chef Mike Bassett, you want to be blown away.

I wasn’t. I thought the food was inconsistent. Some of it was outstanding – the coconut-smoked cucumber served with the kabeljou, for instance – and some of it was downright disappointing: such as the plum sorbet that looked and tasted like a frozen bruise.

It was an evening of ups and downs. On the plus side: the wine pairings (all local) were inspired. On the minus side: the ginger dessert was tiny, pale and cold – especially compared to the elaborate, autumn-vibed granny smith apple dessert served, I kid you not, on a slice of tree trunk.

Plus side: the bread platter was a masterclass in baking. Every element tasted as good as it looked – even the beetroot bun that resembled a sphere of salami. Minus side: the kabeljou was overcooked.

The menu is peppered with exotic, foodie words, such as kalamansi, chimicurri and gastrique (in case you don’t know: Japanese citrus fruit, Argentinian pesto and cheffy sweet and sour sauce respectively).

Myoga is not an easy place to get a grip on, conceptually. Bassett is famous for fusion cooking, a style that was intensely fashionable some years ago. As the Myoga website says, fusion was initially concerned with ‘east meets west’. These days, Basset has “started to incorporate more contemporary ideas from around the globe”.

It is true that the menu offers an opportunity for culinary globe-trotting: it’s rye one minute, edamame beans the next. Here’s a Sichuan-pepper-dipping sauce for the pork belly… Here’s a date-and-caper sauce – and here’s a Scotch egg with boerewors and hanepoot grape jam.

Of course there is an argument for feasting. Why not sit down and just eat delicious things, one course after another, regardless of where the tastes originated? It seems royal, almost. Plus, a chef’s tasting menu should be varied. Even so, I struggled to get a sense of the chef, his food inspiration and his direction – and I realized I wanted to know these things.

Myoga says it caters to diners with “experimental” tastes and those who want to eat “simple food”. My experience of Myoga was that it was possibly too diner-focused; that Bassett’s fusion cooking mastery is being forced in the direction of around-the-world comfort food. There is a danger in crowding the menu with too much exotica: it starts to feel like a something-for-everyone buffet.

One quickly tires of being fawned over by inexperienced waitresses – as one would, even, of wearing a crown.

I realized I’d wanted to be taken on a taste adventure: a sensuous but carefully-themed culinary rollercoaster, secure in the tracks of Bassett’s mastery. One only needs a teeny spoon of that kalamansi sorbet to appreciate his skill and experience.

Instead, there is veering. I thought some of the far-out elements bordered on kitsch – the apple marshmallow cubes; the prawn cracker. Meanwhile some of the “safe” elements were dowdy: the rather ordinary gazpacho, the unexciting spring roll.

I liked the dishes that seemed unselfconscious. Basset is capable of remarkable refinement. The scallop was the dish of the night. Everything about the white-on-white dish was Gatsby-elegant: the all-white scallop, macadamia-buttered root vegetable puree, refried white beans, horseradish cream and the orange gastrique.
Myoga could do with a narrowing of focus: a clearer statement of concept and an edited menu. A chef of Bassett’s standing can afford to lead us. He needn’t be led by us.